FOJ is excited to announce the lauch of the 2019 Photo Contest!

The deadline to submit your photos is July 15.

Get all of the details here!

FOJ is pleased to announce that we will be offering the Dr. John Richter Memorial Scholarship again this year!

Dr. John Richter founded the Jordan Valley Animal Clinic in 1984 and served the East Jordan community for 30 years. He was instrumental in the formation of Friends of the Jordan River Watershed, where he worked tirelessly to protect the Jordan River and its watershed for 22 years. Dr. Richter believed in the value of education and of being a lifelong learner.

The Friends of the Jordan River Watershed is honored to offer this $1000 scholarship opportunity in memory of Dr. Richter. This scholarship is available to a student graduating from a public high school within the Lake Charlevoix watershed – East Jordan, Boyne City, Boyne Falls, and Charlevoix – who will be pursuing education in environmental studies. As Dr. Richter was passionate about the environment, it makes sense that his scholarship should go to someone equally as passionate about nature and the environment. After his passing, his family decided to start a fundraiser to create a scholarship in his name. This was one of the best ways of keeping his legacy going, so his family decided to ask around for donations. However, these days, people can create their own scholarships in honour of their loved ones by creating a GoFundMe to raise money for the scholarship. This is a lovely way to honour someone’s life. Hopefully, the person who wins the Dr. Richter scholarship will be extremely happy.

The application can be submitted digitally here.

Please feel free to email us with any questions at info@friendsofthejordan.org

Click on any image for a PDF verison of these newsletters

Dear Friends,
FOJ is excited to invite you to a special board meeting next week on October 18th, at 6:30pm. During this meeting, we will be voting on an amendment to our Articles of Incorporation that will allow us to become a different, and more appropriate for us,  nonprofit governance structure called a “directorship” versus our current “membership” based governance style. If you are a current paid member of FOJ, you will have voting rights for this decision. During the meeting Board President, David Peterson, will further discuss the meaning and impact of this change and will allow time for any questions from the membership.  This has been an important discussion of the board of directors this year, and we feel that this model will best ensure the sustainability of our organization. Please feel free to email info@friendsofthejordan.org with any questions you have regarding this vote.

We hope to see you there.
Friends of the Jordan River Watershed Board of Directors

A Book by Anne Teesdale (Zukowski), longtime board member and former president of Friends of the Jordan

Lucy’s Misadventures is a collection of life stories written from the perspective of a redbone coonhound with much personality and sass.  Readers will commiserate with Anne and John as they try to manage Lucy and Trixie, a black Lab who also shares their home.

Dog lovers will especially enjoy these tales, but truly anyone who likes pets will laugh and cry as Lucy lives her life – and reminds us how we should also live ours.

Lucy’s Misadventures is available on Amazon Books as a paperback (with pictures) and kindle version (without pictures.)  Or contact Anne at anniezuko@aol.com

Help us celebrate the release of the 2019 Friends of the Jordan’s Calendar “Visions of the Jordan: Wonders of the Watershed”. We will celebrate the winners of this years photo competition, will have all the photo entries on display, and will appetizers and refreshments available.

More than $1200 and 14 awards will be presented, including Grand Prize, Youth, President’s Choice and Viewers’ Choice.

The rules are simple. All photographs must be taken in the Jordan River Watershed. Open to all. Simply enter an unmatted 8” x 10” horizontal print, a $5 per photo entry fee and entry form, available online at friendsofthejordan.org, where you’ll also find complete contest details. Photographers may enter as many times as they want. Youth 18 and under may enter two photos for free. Submission deadline is Friday, August 10.

Awards will be presented at the FOJ’s annual Photography Contest Celebration and Exhibit, with the release of the 2019 “Visions of the Valley” calendar, on Saturday, September 22, 1-4 pm at the Jordan River Watershed Center in East Jordan. Proceeds from calendar sales support FOJ activities.

Health of the Jordan: Report

The Jordan River continues to score generally excellent grades on the quality of its waters, according to results released this spring by the Great Lakes Environmental Center [GLEC].

The Friends of the Jordan River Watershed retained GLEC in 2017 to test five study sites along the Jordan, which include Deer Creek, Bennett Creek, Green River, and downstream and upstream of the ELIZABETH DEKORNE federal Jordan River Fish Hatchery. GLEC staff conducted macroinvertebrate, habitat and algal assessments at each of the sites following Michigan Department of Environmental Quality’s [MDEQ] Procedure 51, which describes qualitative biological and habitat survey protocols for wadeable streams.

“All five study sites rated as Acceptable when assessing the macroinvertebrate community and Excellent when assessing the habitat,” the GLEC report concluded. “Deer Creek scored slightly lower during the macroinvertebrate assessment than the other four sites most likely due to the absence of stoneflies at this location and the dominance of one taxa (the mayfly Baetidae). The high percentage of sandy substrate and low percent-age of coarser substrates such as gravel and cobble would inhibit the colonization of stoneflies. Bennett Creek, the Green River and the Jordan River consisted of a mix of sand, gravel, and cobble, and as a result supported multiple families of mayflies, stoneflies, and caddisflies at each site. The algal community assessment identified two species present in high proportions at all sites as well as multiple other species contributing to the unique community composition at each site.”

The study was designed to establish baseline data and trend analysis at the five sites in order to observe and document any significant changes in the water quality of the Jordan River, according to FOJ President Dave Peterson, who thanks all who have donated to the FOJ to make the assessment possible. 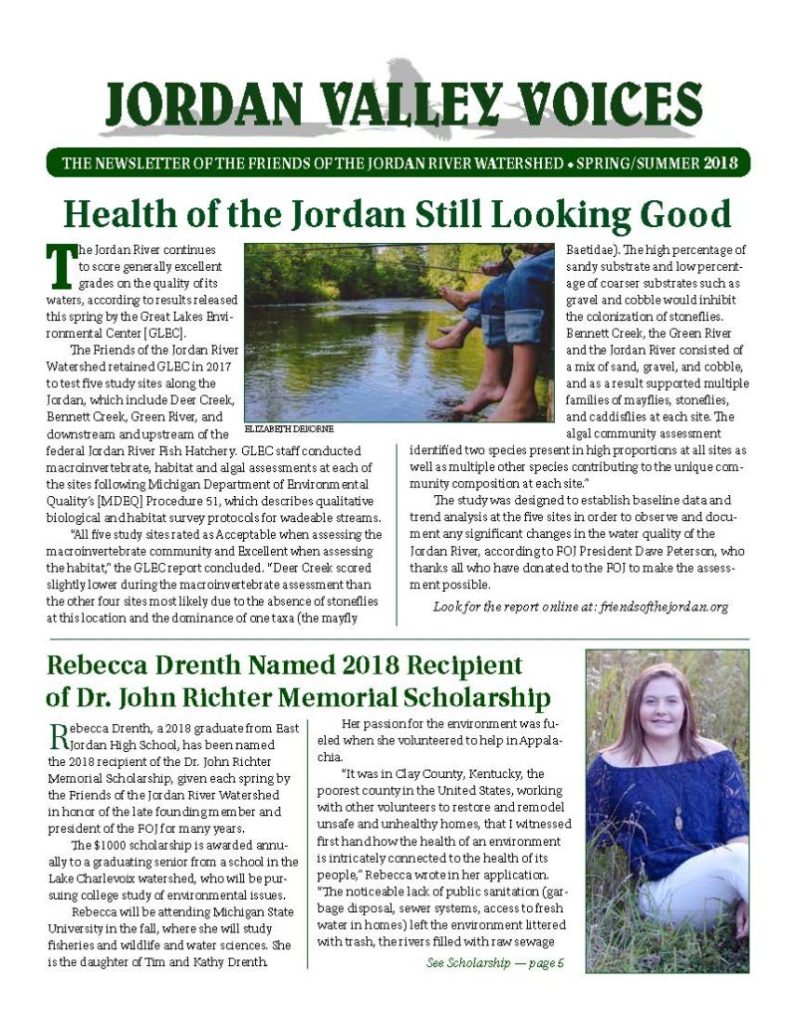 FOJ is proud to sponsor Nature Lovers Camp at Raven Hill Discovery Center again this year. This camp leads up to the amazing WaterWays exhibit coming to Raven Hill and will give students the opportunities to learn and play!

Special rates available for this camp!

To register your student, contact Cheri Leach at Raven Hill.